Well, April has lived up to its local billing – ‘en abril las aguas mil’ goes the Spanish refrain – and it has rained a LOT. On reflection, not the best month to choose for my 5 Goals. I’ve only managed to get out climbing once (seeping limestone is no fun, unless you’re a caver), the garden has been so waterlogged I’ve scarcely been able to set foot in it and all this crushing failure and being trapped indoors has positively driven me to drink! The classic vicious circle. 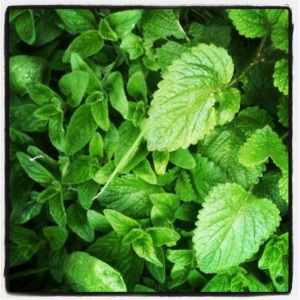 I know, I know....I live in Green Spain....and you don't get a herb garden this lush and green without a little water....but enough already!

Then yesterday the much-missed sun poked his head out from behind the clouds and instantly the world was transformed. The clouds lifted and once again I could see the mountains in the distance. As a gusty southerly wind quickly dried all memories of the rains, I rushed into the garden to check out what state it had been left in.

First to the garden’s borders where I had worriedly watched delicate young flowers become increasingly battered and bedraggled in the high winds and lashing rains. I feared that nary a petal would be left.

But with the first touch of weak sunshine after the rain the flowers had instantly perked up. Their green stems had snapped to attention and droplet bejewelled petals reached up, unfurling towards the sunlight.

Further down the field the seeds sown earlier this month that I feared would have been washed away in the deluge were now sprouting through, with strong, green shoots. Well and truly watered in, all that was now required was some sunlight to complete the cycle.

Above all, however, I was delighted to discover that my reign as Goddess of the Slug and Snail Kingdom has finally come to a close. For the last 6 years I have invested a lot of time, money and hard work in feeding said creatures only the finest of organic, gourmet baby vegetables. Ordinarily, over the course of just a few wet days and nights they would chomp their way through swathes of seedlings, pausing in their feasting only to occasionally toast my name with the beer I had left out for them in my otherwise pointless traps. But no more. Finally I have discovered an effective ecological method (Ferramol) of controlling the greedy blighters. We may yet have a decent harvest. How exciting!

As I continued around the field inspecting the progress where I had expected to see only damage, I felt myself unfurl a little too. I stood taller, drinking in the views revealed anew around me. A contrast to the last weeks of darting outside in gaps between downpours, always rushing along, hunched forward, head bent and hood pulled down tight against the elements.

It’s not been a fun few weeks, to be frank. But some necessary stuff got done – including the complete re-decoration of our rental house in time for our guests’ arrival last Thursday. Now that that hard slog is succesfully completed on time and the sun has come out to play again, everything is starting to feel a little easier. Small but significant positive decisions and actions start to follow freely and feed into one another. And just like that, a virtuous circle is born.

Camomile tea - sunshine in a cup

7 thoughts on “The Sunshine After The Rain”